Where is Pamplona? How do I get there? Questions answered

“How do I get to Pamplona?”

Getting to Pamplona isn’t that tough, there are many ways.

You will probably be coming from one of the metropolitan cities of Madrid or Barcelona.

The national train of Spain is named Renfe, and they have a series of trains that frequent Pamplona, especially during the San Fermin.

Rail Europe is based in the US and usually has a little higher rate than buying directly from Renfe. However, we would not be doing our job if we didn’t share that the Renfe website is notoriously full of errors and confusing translations. It might be worth the extra pennies for the peace of mind to book with the domestic company.

You can buy train tickets once you arrive in Spain as well, just do not expect to have the most ideal path. The non-stops are usually sold out, so you will have a layover in a city such as Zaragoza, where you will need to board another train. When purchasing tickets in Spain, there will be an English option at each ticket kiosk.

The main train station in Madrid is called Atocha, and is located about 45 minutes away from the airport. From there, you are able to take trains all over Spain, including Pamplona. The trip from Atocha to Pamplona is typically 3 hours non-stop.

You can purchase train tickets up to 60 days in advance at www.renfe.es. We recommend buying tickets before you leave because the month of July the trains to Pamplona get pretty full.

One of the major train stations in Barcelona is called Sants (Estacion Sants), and you can get there via tram directly from the Barcelona Airport. The trip from Sants to Pamplona is typically 3.5 hours non-stop.

Once in Pamplona at the RENFE train station

We will give detailed information in your itinerary on how to get from the RENFE station to your hotel. The train station in Pamplona is located 2.5 miles from our hotel, and there are usually a line of cabs out front. Expect to pay about 5-10 Euros for the transfer.  You can walk as well, but with bags and the craziness that will have already ensued in Pamplona, it is much simpler to get a taxi and save your feet for the town!

We used to offer transfers from the airport/train station, but with so many people coming in and the inevitable delays that take place in the Spanish transportation system, it makes much more sense for you to find your way to the hotel, and we’ll meet you there. 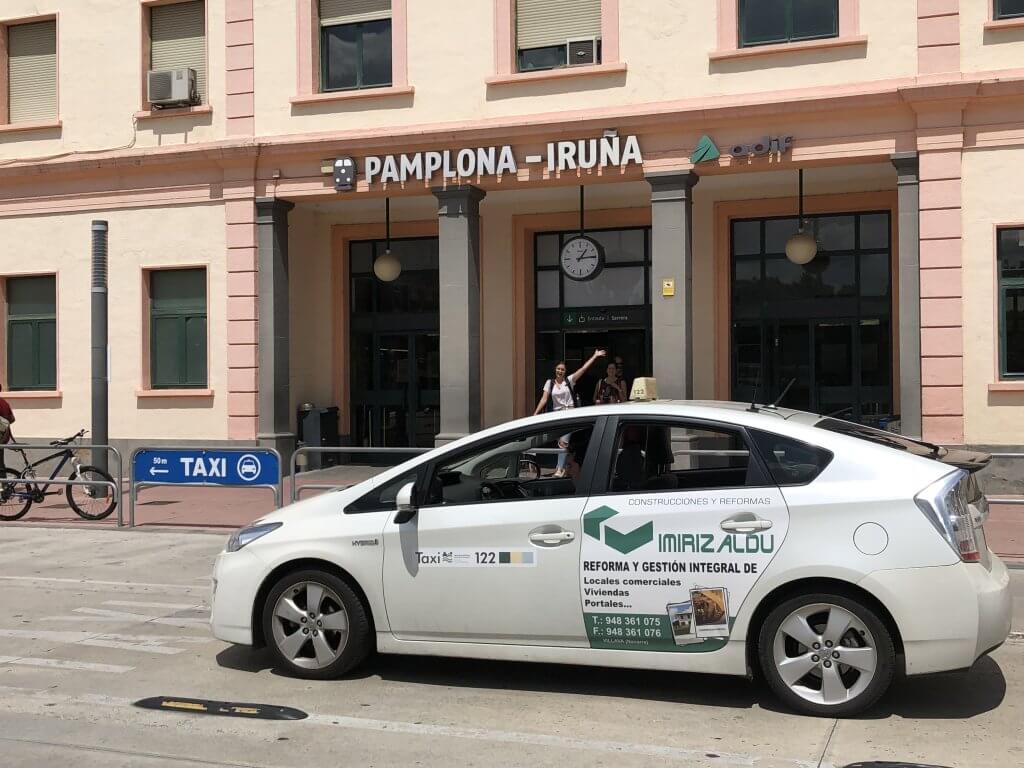 There is usually a line of cabs at the train station

Buying a round trip train ticket instead of two one-way tickets comes out to about 20% cheaper.

If you are positive about you travel times and dates, you can get discounts for buying in advance. However, these are typically non-refundable.

Buses will typically be the most competitive option

Since public transportation is so prevalent throughout Europe, you can expect a clean and safe bus to get you to Pamplona. Also, the bus station is only 800 meters from the hotel in Pamplona.

If renting a car…

The only way to get to San Sebastian is via bus (about an hour). During the month of July, there are frequent buses to/from Pamplona (almost every hour). Staying in San Sebastian is not an option during San Fermines! The first bus will get you into town after the bulls have come and gone through the streets of Pamplona! Here is information about the bus schedule, and here is where you can book tickets ahead of time.

This is sometimes not considered because many people do not realize that Pamplona does, in fact, have an airport, its code being PNA. It may have only two gates, but there are daily flights from both Madrid and Barcelona.

The good part about this is the flights are competitive with the trains in terms of pricing. The bad news, the majority of the flights are in the afternoon or later. Considering that most of the flights coming from the US land early in the morning, you can expect a hearty layover in either Madrid or Barcelona.  If you just keep moving, you can sometimes arrive in Pamplona faster via train or bus.

In 2015, the airlines that included Pamplona in their destinations were Iberia, British Airways, and Vueling Airlines.

Next Page: Trip to San Sebastian ->